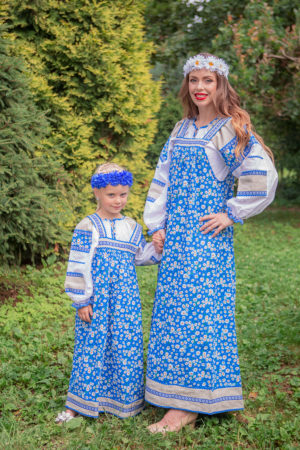 Russian costume of XIX – XX centuries had a specific meaning in the past and every detail of it indicated the people’s lives – design, patterns and colors. Costumes were as hieroglyphs and included certain encrypted information: what kind of person it was, where it was going, what rank it belonged to and its profession. This was visible part of information. There was also rather deep meaning – mystery of birth and mystery of being. Families transferred this deep knowledge from generation to generation and perceived it as amulets against evil spirits. Russian traditional costume – it`s a system, which reflects the outlook of man. There are several semantic elements in this system: hat, shirt, belt, apron, shoes and jewelry. Shape of theseelements and their adornment (characters) means the expression of outlook.

Woman`s headwear meant striving upward to the gods in the sky. This was reflected in their “bird`s” names: “kokoshnik“(“Kokosh” – cock),”Kichka “- duck,” forty “. Unmarried girls wore open headwear like bandage in the form of a tape (towel) with an open top. The meaning of headgear name is “life as an opportunity to soaring upwards in eternity”. The headgear could be changed depending on the age and marital status of woman. There was a ceremony of “unbraiding” at wedding day, when girl was “transformed” into a woman. Friends of bride helped her to unbraid. They divided her hair in half and braided two braids. This meant that she found her soul mate and was connected with it for further procreation. She was dressed in a low headgear “Kichka moloduhi”. After the first child was born and moloduha proved her fertility – she could dress a high headgear with shape of shovel.